Canterbury and Kent were both named after the prehistoric tribe, the Cantii, who inhabited the region. Canterbury was one of the first sites fortified by the Romans when they invaded Britin in 43 A.D.  They 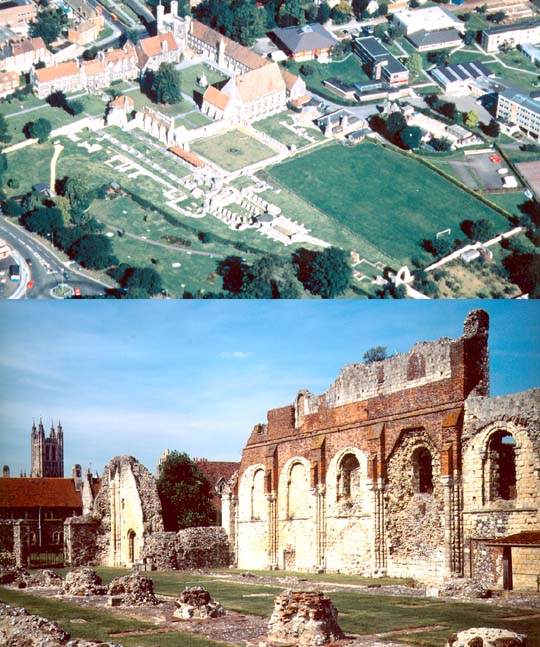 evacuated the area in 410, and Saxon invasions followed shortly.  In 580 the Saxon king, Ethelbert, married Queen Bertha, a Christian, and was convinced by his wife to found two churches, Christ Church (later Canterbury Cathedral) and the Abbey of St. Augustine, named after the missionary who arrived there in 597. Thus, the mother church of England is at Canterbury.

After the Norman invasion, William the Conqueror had two castles built in Canterbury (c. 1090).  The cathedral was destroyed by fire in 1067 and was rebuilt (the oldest extant parts of the cathedral today date from the Norman period). The dormitory in the cloisters also dates from c. 1070. Architectural styles in the church include Norman, Early English, Decorated (1170's, designed by William of Sens.  Sens was where Becket lived in exile), and Perpendicular. 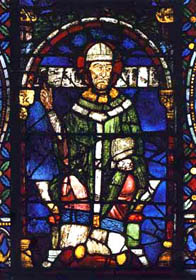 The martyrdom of Thomas Becket in 1170 (29 December) turned Canterbury into a boom town, and pilgrims coming to worship at Becket's shrine brought great wealth to the area. A corona or rounded chapel was built at the East end of the church to keep the top of Becket's head which the four knights had cut of

f. Henry II who had incited the murder was forced to do penance, coming to Canterbury wearing a hair shirt and no shoes where he was scourged by the monks.  Chaucer's 14th c. "Canterbury Tales" reflect the medieval importance of the shrine.  In 1471 Edward  IV made Canterbury a county borough, the smallest in England.

The advent of the English Reformation led to the dissolution of the monasteries and the destruction of Thomas Becket's tomb.  Thomas More's daughter, Meg Roper, lived in Canterbury, and after her father was executed she brought his heart back to the Cathedral where it was entombed.

Canterbury was a royalist town during the English Civil War and as a consequence, when Cromwell came to power he demolished much of the city wall.  After the Restoration of the monarchy, Charles II spent his first night in Canterbury.

Although there are numerous references to various monarchs throughout the cathedral, including stained glass windows featuring Richard II and Edward IV, Henry IV is the only king buried in Canterbury. 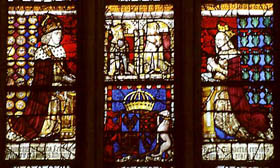