HENRY VII
AND THE NEW MONARCHY

The term "new monarchy" was used to describe a monarchy that was centralized, authoritarian, and national--compatible with the capitalist, international, and powerful image of modern Britain. 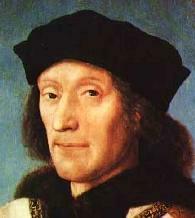 Henry VII became king in 1485 when he defeated Richard III's forces at Bosworth. In 1486 he married Elizabeth of York, the daughter of Edward IV. Nonetheless, threats to his throne remained great. In 1487 Yorkists claimed Lambert Simnel was the Earl of Warwick and attacked Henry's army at Stoke in 1487. In 1491 Perkin Warbeck claimed to be Richard of York and got French and Scottish support for his cause. In November 1499 Henry executed both Warwick and Warbeck.

Most of Henry's councilors had been councilors to Edward IV and a good number were clerics. His chief secular advisors tended to be lesser landowners and professional men.  Tudor kings "ruled, not reigned."

Most of the royal council's business was judicial rather than administrative. Judicial sessions dealing with criminal cases met in the Star Chamber. The most notorious of Henry's courts was the "Council Learned in the Law," whose purpose was to collect debts owed to the crown.

From Henry's perspective, the goal of the financial system was to ensure that the king got what was his. The treasurer of the chamber became the chief financial officer of the crown, but Henry was the real finance minister.

Government was essentially a matter for the king and his council. Parliament was neither an integral nor regular part of this machinery. The lords met in the royal palace at Westminster and consisted of two estates, the spiritual and secular. In a full house the spiritual peers totaled almost 50; lay peers, almost 40. The representatives of the shires or commons met in the chapter house of the Abbey of Westminster and were thus referred to as the House of Commons.

A statute was a legislative measure made by the king in parliament, and unlike royal proclamations, was enforceable in the courts of common law. Although Henry's parliaments passed over 120 public acts, parliament was still seen as an agency to enforce the king's will.

Justices of the Peace were appointed annually by the Lord Chancellor with the approval of the crown and charged with the maintenance of local law and order. JPs were men of substance from the community. There were approximately 50 chosen per county and 8-10 were needed for a quorum at quarter sessions.