The Roman conquest of Britain began in 43 A.D., and by 47 A.D. eleven British kings had submitted to the Roman emperor Claudius.  The Romans originally established their capital at Colchester (Camulodunum) and used London (Londinium) as a supply port.  The latter city was destroyed during Queen Boudica's revolt of 60-61 A.D. and subsequently rebuilt as a planned town.  By 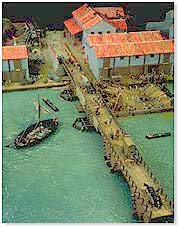 100 A.D. Londinium had replaced Camulodunum as the capital of Roman Britain.

The Romans built the first London Bridge over the River Thames and constructed two major roads which approached the Thames from the South and intersected to the South of the bridge.  In Roman times, the river was almost three times as wide as it is currently, but interestingly enough, the present day London Bridge is located at the site chosen by the Romans in the first century A.D.


1.  Peter Salway in his chapter on "Roman Britain" in Morgan's Oxford History of Britain writes: ""The critical difference between Roman Britain and what went before is that its society was literate, perhaps more literate than at any other time till the end of the Middle Ages" (2-3).  Discuss this statement with reference to the exhibitions in the London Museum.  What examples do you see that illustrate the important of literacy to Roman rule in Britain?  How did the Romans enforce their authority on the largely illiterate population of Britain?

2.  The Romans were an urban people. Their Anglo-Saxon successors were not. Choose two Roman exhibits in the London Museum and compare them to two Anglo-Saxon (early medieval) exhibits.  What elements of change and continuity do you see in the culture of London after the Roman departure?