The City of Winchester in Hampshire is closely connected with the history of the monarchy.  It was the capital of the Anglo-Saxon kingdom of Wessex, and from the time of

Alfred the Great in the 9th century, the principal home of the Anglo-Saxon rulers.  The present royal family traces its ancestry back to Egbert, Alfred's grandfather and the first Anglo-Saxon "bretwalda" or ruler to call himself King of England.  Alfred helped the Anglo-Saxons rebuff the attacks of the Danes by reforming the army or fyrd, creating a new class of nobles or Thegns, and eventually confining the Danes to a territory in the east known as the Danelaw.  In order to rule more efficiently, he divided the country into shires, adopted a single law code (the Dooms of Alfred), and promoted scholarship, both in Latin and the vernacular.

Alfred was not the only English monarch to be associated with Winchester.  William the Conqueror constructed a castle and palace her

e in 1079, King Rufus died in Winchester and was buried below the Cathedral tower (which collapsed 7 years later),  after Henry I's death his heir Matilda and her cousin Stephen fought for the throne in the town, Henry III was born in Winchester and was baptized in the Cathedral, Henry VIII hosted Emperor Charles V in the castle's Great Hall, Mary I and Philip of Spain were married in the Cathedral, and James I ordered Sir Walter Raleigh to be tried for treason in the Great Hall.


Winchester was an early religious as well as political center.  King Cynegil is credited with bringing Christianity toWinchester in 635, and Winchester's first cathedral was built by King Cenwealh of Wessex in 642. The present Winchester Cathedral, begun in 1079, stands on 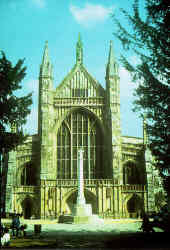 the same site and is the longest in Europe. The Cathedral is dedicated to the Holy Trinity, Saint Peter and Saint Paul, and Saint Swithun of Winchester.  In English folklore rain upon St. Swithun's Day in July indicates that the next 40 will be wet.

St. Swithun subsequently became the Patron Saint of Winchester, and his tomb is located in the presbytery.  Other historic items in the cathedral include the tombs of Izaak Walton and Jane Austen, the illuminated Winchester Bible of 1160, and the mortuary chests containing the bones of ancient British monarchs.

From 670 onward, the bishops of Winchester were powerful personages. Their numbers included cardinals, papal legates, a chief justice, keepers of the royal seal, treasurers, and chancellors of England, including Henry 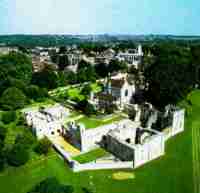 VIII's adviser Cardinal Wolsey.  The bishops possessed lands stretching from Taunton in the west to Southwark in the east. Wolvesey, the old Bishop's Palace, is located  in the town of Winchester. Farnham Castle Keep and Bishop's Waltham Palace were also residences of the Bishops of Winchester and served as administrative centers. Netley Abbey and Titchfield abbey, founded by Peter des Roches, bishop from 1204-38, were patronized by the royal family.

Winchester Castle dates from the 12th century and its Great Hall from the 13th.  Its Purbeck stone columns, pointed arches and plate tracery windows reflect the Early English Gothic style of architecture.  The castle was the birthplace of Henry III and one of his favorite residences. When in residence the King dined in its Great Hall, discussed affairs of State here with his barons and clergy, and sat in court to administer justice. The Great Hall was the seat of parliament in the Middle Ages.  On the west wall of the Hall was located the famous Round Table of King Arthur.  The table dates from the 13th Century but was repainted for King Henry VIII, prior the visit of Emperor Charles V to Winchester. The oak table depicts a robed King Arthur with the names of his knights carved around the circumference (and the Tudor rose). The royal apartments were destroyed by fire in 1302, and, as a consequence, the castle no longer served as a royal residence.  A haven for royalists during the Civil War, the castle was dismantled by parliamentary forces in 1649, and its ruins sold to the city in 1656.