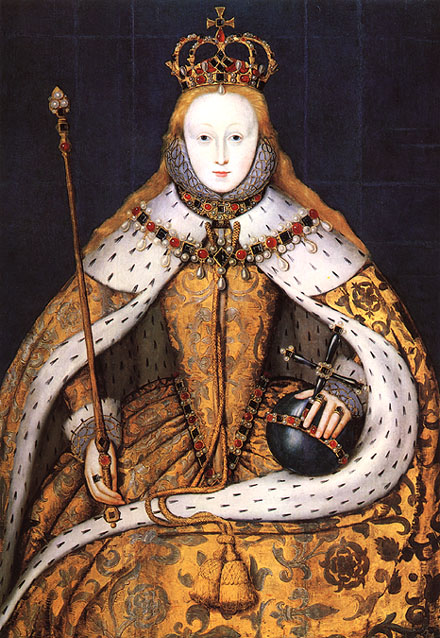 Elizabeth was toughened by adversity. Her enemies called her the “Little Whore,” and her actions were closely scrutinized for signs of immorality. Catherine Champernown - or Kat - (later Kat Ashley) was chosen as her Lady Mistress in 1536; William Grindal, her tutor. She was schooled in “the particular world view of English Protestant humanism.”

At age fourteen, she was involved in a scandalous “love triangle” with Catherine Parr and Thomas Seymour. Catherine’s death in childbirth in 1548 led to rumors that she had been poisoned by Seymour who planned to marry Elizabeth and rule through her. Elizabeth and her servants were interrogated but released.

In 1548 Elizabeth was given a new tutor, Roger Aschan, who wrote that her mind was “exempt from female weakness” and possessed “a masculine power of application.” When Ascham returned to Cambridge in 1550, Elizabeth moved to her own country house at Hatfield. She remained at Hatfield while Northumberland and Mary contended for the throne in 1553.

Wyatt’s Rebellion almost led to Elizabeth’s downfall. She was imprisoned in the tower and then sent under armed guard to the medieval palace of Woodstock. As Mary’s Catholic policies and Spanish husband became more unpopular, Elizabeth’s popularity (and threat to Mary) increased.

Carrolly Erickson in The First Elizabeth sees these early years as important training for Elizabeth’s future role as monarch. Elizabeth learned from reading the classics and from watching Mary (make mistakes), the art of successful government.

When Philip returned to England in March 1557, he not only wanted Mary to get parliament to join him in a war against France, but he also wanted her to find a husband for her successor. Not until the first week of November 1558 did Mary officially declare Elizabeth to be her successor. On 17 November 1558 Mary died, and Elizabeth became Queen of England.